All you need to know about Cinema Italia in Malta

Cinema Italia returns to cinemas this week at Spazju Kreattiv. Five diverse Italian Arthouse films, yet to be presented in Malta, shall be screened. Do not miss out on this incredible opportunity to catch the vitality and originality of Italian filmmaking. 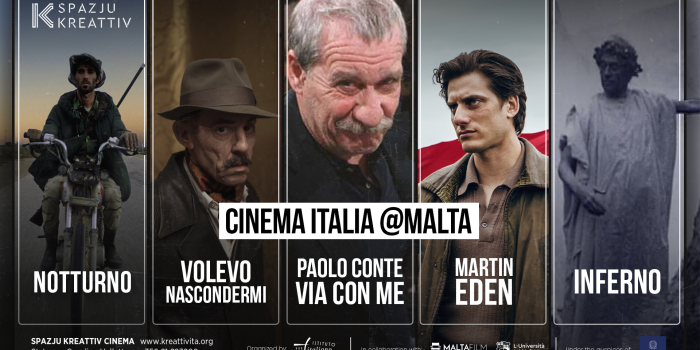 Cinema Italia @ Malta returns to the screens following last year’s online edition. From the 16th July to the 25th July 2021, the Spazju Kreattiv Cinema shall be showing a review of five films, including a tribute to Dante Alighieri, the Father of the Italian language, on the occasion of his 700th anniversary of his death. We shall be taking a closer look at the films as well as some key information associated with them. The well-educated, refined young woman soon becomes an obsession for Martin who hopes that his dreams of becoming a writer will help him rise above his humble origins to be able to marry Elena. With determination and at the cost of great hardship, Martin sets out to get the education that his class has never allowed him to receive. Finding support in an older friend, left-wing intellectual Russ Brissenden, Martin soon gets involved in socialist circles, leading not only to political reawakening and destructive anxiety, but also to a conflict with Elena and her bourgeois world. The new film by award-winning filmmaker Gianfranco Rosi (Fire at Sea), Notturno is an urgent cinematic achievement from a master of the documentary form.

Shot in Iran, Kurdistan, Syria and Lebanon over the course of three turbulent years, it is an intimate and devastating depiction of the civilian populations who have no choice but to live on the frontlines. Told with compassion, grace and humanism, this is a breath-taking cinematic journey. Toni, the son of an emigrant Italian mother, deported back to Italy from Switzerland where he had a difficult childhood and adolescence, lived for years in a shack by the river without ever succumbing to loneliness, the cold or hunger.

Meeting the sculptor Renato Marino Mazzacurati was his chance to return to painting, the beginning of a redemption story in which he feels art is the only way to form his identity, a real opportunity to make his name known and loved by the world.

“El Tudesc,” as people called him, was a lonely, scrawny, ugly and often mocked and humiliated man. He became an imaginative artist who painted a fantasy world of tigers, gorillas and jaguars on the banks of the Po.

Overpowered by a regime that wanted to “hide” people who are different and a victim of his own anxieties, he is locked up in an institution. He quickly returns to painting while there. More than anyone, Toni paints himself, as if confirming his wish to exist beyond the rejection he had been enduring since childhood. Leaving the psychiatric hospital is a turning point towards redemption and the public acknowledgment of his talent. Fame allows him to show off the wealth he has gained and open his eyes to the life and feelings he had always repressed. His work over time has proved to be a gift to collective humanity, the gift of his diversity. Paolo Conte, one of Italy’s top-ranking artists, is also one of the most international and least portrayed due to his proverbial reserve and strict standards.

His music, like a beautiful film, has the power to tell stories and elicit emotions. Conte is one of the greatest singers in the province of the world – to quote his song lyrics “La provincia del mondo”, and has been compared by the New York Times to Tom Waits and Randy Newman.

Paolo Conte. Via con me (It’s wondeful) by Giorgio Verdelli, tells the story of an eclectic and, in some ways, mysterious character, over almost fifty years of history and not just about music. It is a sort of ideal itinerary, where words, verses and music interweave and take pictures of our imagination through this great artist’s songs, concerts and friends, as well as his thoughts and reflections.

Verdelli draws on Conte’s immensely rich personal archive, from filmed footage of international tours to the many special moments that make up an absolutely unique career. The film explores the maze of his music – his songs – even those written for the most diverse artists (Adriano Celentano, Enzo Jannacci, Jane Birkin, Caterina Caselli and Bruno Lauzi, to name but a few), as well as entering the labyrinth of his passions (for jazz, puzzles, painting, the law, cinema). For the first time we will see Conte in his studio in Asti, drawing and talking about his music. The Inferno, (1911) is a silent movie by Francesco Bertolini, Giuseppe de Liguoro and Adolfo Padovan, and produced by Milan Films. It is the first colossal film in the history of Italian cinema.

Adaptation of the first cantica of Dante’s Divine Comedy, only available in copies damaged, mutilated or censored, was, in 2011, painstakingly restored to its original edition, with the correct sequence of the shots, and to the fullness of his light and colors.

The silent film will feature a live soundtrack by Italian jazz player, Marco Castelli. He carries the audience in a world of sounds, which makes even more exciting the vision of the incredible images of the film simultaneously giving them a surprising modernity.

Brought to you by...

Cinema Italia @ Malta is an initiative of the Istituto Italiano di Cultura in Valletta organized together with Spazju Kreattiv and realized in collaboration with M.A. in Film Studies, Faculty of Arts, University of Malta under the auspices of the Embassy of Italy.

Stay up to date with everything that Spazju Kreattiv are organizing this summer here.