Oktoberfest at Ivy House – A Celebration of Music and Beer

Come and experience the Oktoberfest fun this year down at Ivy House. With 3 stages, 18 live acts, a food court, a boutique market and a great selection of beer, this festival is our top featured event of the month. 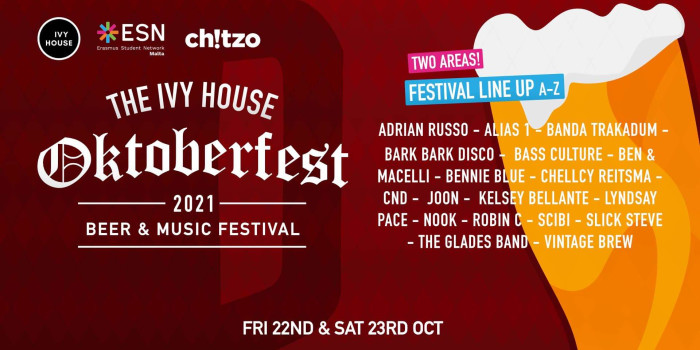 Oktoberfest is celebrated annually by millions of people in the Bavarian region of Munich. From amusement rides and floats, to beer halls and beer wagons, to people in folk costumes dancing away to the music, the two week festival is an absolute blast. Over the last couple of decades, many cities around the world have also created their own version of Oktoberfest, and this year, Malta also has its own little festival too down at Ivy House.

Having quickly cemented itself as one of Malta's most forward-thinking venues, Ivy House is not your typical social club. It’s a place where culture meets entertainment to create an incredible atmosphere. The team is constantly looking to innovate, and they’ve entertained guests with a wide variety of performances over the past year including their popular jazz and flamenco nights. They are also contributing to promoting the local music and art scene in Malta, with the introduction of their own residency programme for local musicians and artists to showcase their work. Ivy House are busy preparing for their biggest event yet. They are creating their own take of Oktoberfest, featuring some of Malta’s most talented live acts as well as a diverse range of beer and food. The festival is taking place at their unique premises within the limits of Pembroke. It’s starting on Friday 22nd October at 5pm and will keep on going all throughout Saturday 23rd October.

They have setup the location to have 2 separate areas with stages for the live acts. The first one is in the terrace and second one is setup in the beer garden. They will also be having their main hall for after parties. Here is a breakdown of the areas: An imposing and peculiar structure, the main hall is where all the magic happens. Used as a church during the British rule in Malta, the building has been elegantly refurbished to a family style restaurant. The first stage will be setup here, and will be used for an after party set on both Friday and Saturday night from 11pm onwards. Its high ceilings will help to create an intense music experience well into the night. The second stage will be neatly setup on their beautiful terrace. The area will be home to the acoustic and intimate performances. On Friday evening, 4 solo artists will take to the stage and warm us all up for the entire festival. Luke Grech will be kicking things off at 5.30pm, before Bark Bark Disco, Joon and Alias 1 will be playing their sets. The Saturday performances will start with Jazz curtosey of Aiden Russu at 11.30am. The day will later involve some of Malta’s most iconic bands including Bennie Blue, Vintage Brew, The Glades and Chellcy Retisma. Lydnsay Pace will bring the terrace area to a close on Saturday evening with a powerful performance. The third stage will be set at their awesome beer garden. The area is covered in green turf and benches, perfect for groups of friends to drink beer, eat and vibe to the various DJ acts who will be showcasing their music. Nook will hit the decks for a 6hr set on Friday evening, but you may also catch more Djs on Saturday. Ben n Macelli will rock the garden from 1pm, before Bass Culture, Robin and CnD will take you through the day with their 2-hour sets. Slick Steve and Scibi will then play back-to-back to close the evening.

The Food Court and Boutique Market

A lovely food court will be setup throughout the whole festival. Ivy House have teamed up with Brato, a new German food vendor rocking the Maltese Islands. They will be preparing quality homemade German comfort food and the Schnitzel Bun and artisan sausage come recommended. Ivy House will also be serving Spanish style tapas and freshly prepared ftiras throughout.

The FEM Boutique Market will also be present. They are a community of female entrepreneurs and will be sharing their products throughout the day on Saturday. It’s a great opportunity to grab something unique from as many as 20 hand selected exclusive boutique labels from candles, fashion, vegan treats, home decor, Jewelry, baby clothes, accessories, handbags, home grown plants and hand-crafted products. One of the main reasons why so many tourists make the journey to Munich every year is perhaps the availability of quality German beer. Ivy house have set up in the same spirit celebrating a mix of international beers. You will find German beer like Weihenstephaner and Erdinger; Belgian beers such as Kwak, Chimay, Vedett, Westmalle Trippel; Italy’s national beer - Birra Moretti; and representation from the UK and US with Fantasma Gluten Free IPA, Sierra Nevada Pale Ale and Lagunitas IPA. You will also be able to get your hands on Stretta, a pilsner style lager that is crisp, light and incredibly refreshing.

Meet some of the Artists

18 acts are confirmed for the festival, ranging from acoustics, rock bands, jazz, salsa & Latin music, folk, hip hop, dub & reggae, afrobeat & electronic music. We are covering the story of just 4 artists so that you can get an idea of the depth of talent on show at the Oktoberfest. Ian Schranz, best known by the stage name Bark Bark Disco, is a Maltese indie musician. He began his career as the drummer of the band, Beangrowers, before establishing himself as a solo artist. Schranz released his first single under the name Bark Bark Disco and was invited to play his debut show, opening for Bonnie Prince Billy. Following this, Bark Bark Disco toured Japan, Europe & the US. Macelli started out as a house music DJ back in 2016, but his sound has now developed to encompass a wider range of styles which include minimal and dub techno. He’s currently a resident on District’s roster, and has been performing for them since 2017. Macelli is commonly seen playing B2B with Ben Cartyr, his co-founder of their nightlife brand ‘NICHE’. Bennie Blue is an Alternative rock band. Their eclectic influences have shaped a unique sound that captivates audiences by stretching the boundaries of the genre, using catchy melodies and enthralling lyrics that allow for a truly enjoyable experience. From local festivals and media related projects, to forming part of a girl band, to hitting the top radio charts, Lyndsay Pace is no stranger to the local music scene. Described as a ‘producer’s dream’, she is a versatile singer/songwriter/recording artist. Her passion for music was evident from a very young age, as she carried her natural presence and self-confident abilities through each of her stage performances. She differs from the other acts in the local music industry by bringing a professional aura which incorporates stamina, excitement, attitude and pure energy.

How Do I Buy Tickets?

In its first couple weeks promoting, Ivy House have already sold out more than half the festival and the single day tickets are no longer available to purchase. But lucky for you, you can still get your hands on a two-day ticket for just €15. The ticket will give you a 2-day pass and grant you access to all the great stuff at Oktoberfest.

You can buy your tickets directly from Chitzo.